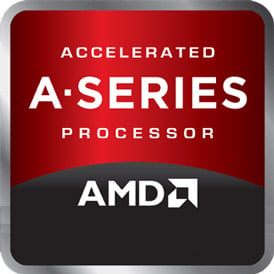 The A series from AMD combines CPU and GPU, as well as video and other hardware accelerators on one chip. This chip is called APU. The A series is used in both desktops and notebooks. The mobile processors can be recognized by the M at the end of the model number.

AMD A processors are typically used in lower-cost notebooks or smaller desktop systems without a dedicated graphics card. The APUs are installed or soldered into the FM2 or FT3 socket and are therefore not interchangeable later. Although AMD A processors are mostly entry-level solutions, most AMD technologies are also supported by AMD A processors. These include AMD virtualization, AES and the graphic interfaces (APIs) Vulkan and Mantle or the Video Code Engine (VCE) for the smooth playback of high-resolution videos.

The newer APUs support a maximum of DDR3 RAM up to a clock frequency of 1066 MHz (DDR3-2133). Since the speed of the main memory has a strong effect on the performance of the iGPU, the fastest possible memory sticks should be used. In addition, the AMD A APUs support dual-channel memory in two memory channels. The use of two memory channels doubles the theoretical memory bandwidth of the system and should therefore be used whenever possible.

The CPU architecture of the current generation of the A series is called Kabini (Jaguar). This generation was presented by AMD at the end of 2014. The APUs have a maximum of 4 CPU cores, SMT (Hyper-Threading) is not supported by the AMD A APUs. APUs after 2014 are branded as AMD Ryzen APU. While the AMD A series was still manufactured in 28 nm, the newer AMD Ryzen APUs rely on significantly smaller structures (14 nm and smaller).

All AMD A CPUs