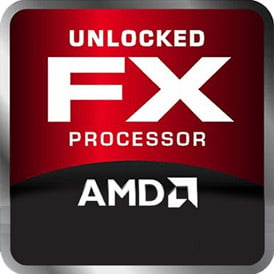 The FX series from AMD is intended for use in desktop PCs and notebooks and includes AMD's faster processors, which are designed for PC gamers, for example. The newer models are based on the AMD Bulldozer architecture. At the moment there are 3 different models: Vishera, Zambezi and finally Centurion. The last AMD FX processors were presented in mid-2016. The AMD FX series was then discontinued and replaced by the AMD Ryzen series, which uses a completely new architecture and is significantly more powerful.

Due to the open multiplier, the FX series is ideal for overclocking and is therefore often at home in high-end PCs. The processors are equipped with up to 8 MB level 3 cache. The CPUs were still manufactured in 28-32 nm processes, which is why the processors usually offered less performance with more waste heat than comparable Intel products. Only the newer AMD Ryzen CPUs are completely competitive again or are they sometimes superior to the competition.

Due to the sometimes very high clock frequencies of up to 5 GHz, the energy consumption of the top FX processors is very high, and a very good air cooler is also required.

The AMD FX processors fit into socket AM3+ and support memory up to DDR3-1866 in two memory channels. The use of two memory channels doubles the theoretical memory bandwidth and requires at least two main memory modules. If possible, a PC should always be operated with at least two memory modules. The AMD FX processors presented in 2016 with Excavator (Bristol Ridge) for notebooks and the FP4 socket already support DDR4-2400 RAM.

The ECC memory error correction is supported by AMD's FX processors, but then requires an ECC-capable chipset and also special ECC memory modules. ECC increases the data integrity of a computer and has therefore become established in business use. On the other hand, ECC is hardly ever used by private users or their computers.